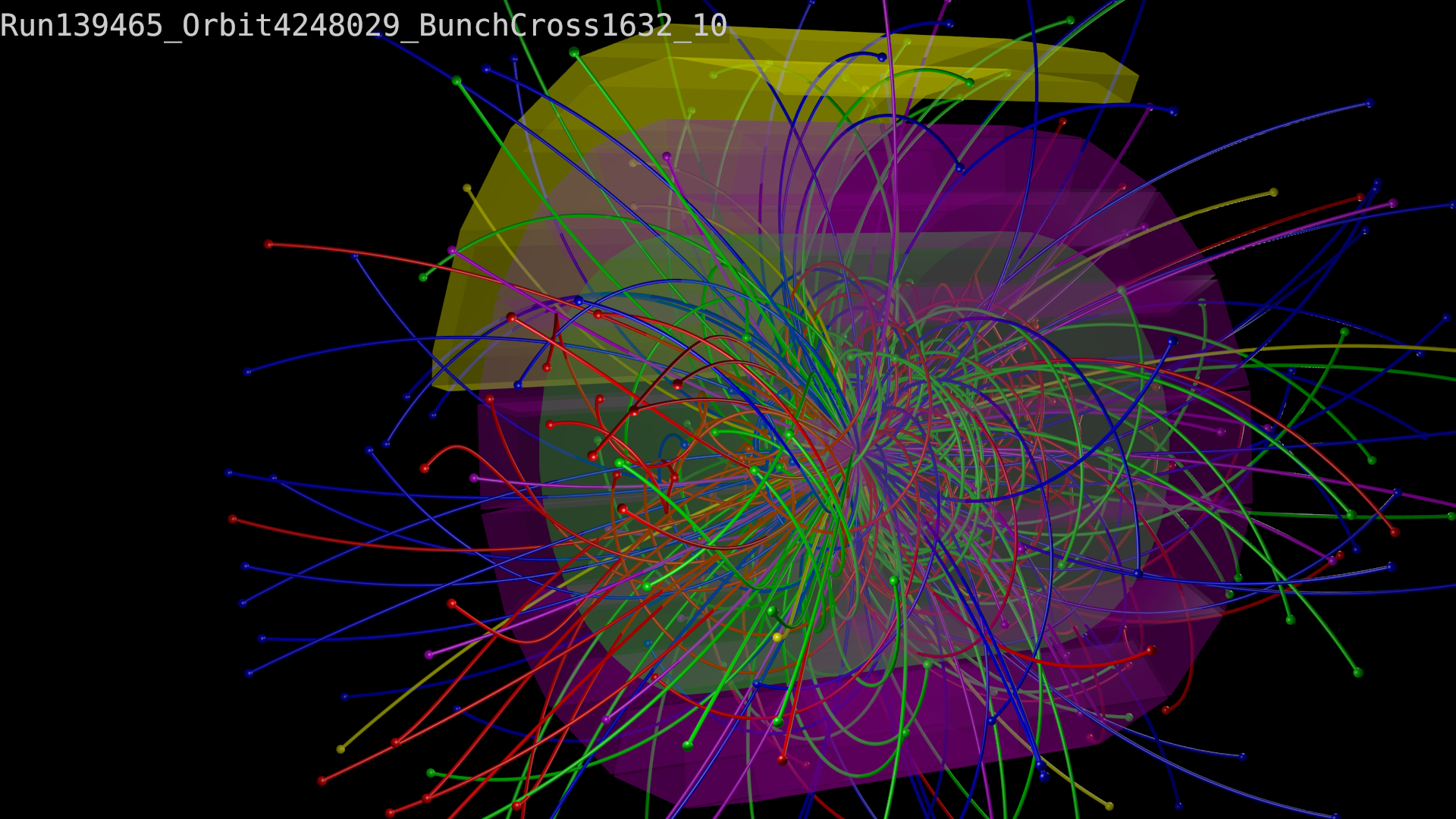 This project has the purpose of generating 3D animations of ALICE particle collision events using data obtained from CERN's Open Data Portal. ALICE stands for "A Large Ion Collider Experiment" and it is a particle detector inside the LHC - Large Hadron Collider -, the world's largest and highest-energy particle collider, located beneath the France–Switzerland border. CERN stands for Organisation européenne pour la recherche nucléaire, which is French for European Organization for Nuclear Research, and it is the home of LHC. CERN's Open Data Portal is an open online platform that contains data files from particle physics; those include the ESDs - Event Summary Data files -, which hold information about ALICE events and are of great help making the animations look like real representations of such events.

How it all works

Before diving into how to run this project, it is important to develop some intuition on how the pieces all fit together to make the whole thing work out just right.

The animation of a particle collision event is generated through 3D modeling software, which sets the position of all the particles at any given time - until the animation is over - with the help of their respective mass, charge and initial linear momentum values, plus the value of the magnetic field and the collision vertex, a spot from which we consider all the particles originate.

All this information must be obtained from somewhere - that somewhere is the above-mentioned ESD files, which contain data about several events each. The ESDs come in a .root extension and may only be interpreted by ROOT, CERN's official software for particle physics analysis. This is done through C++ code, which is written in order to specifically refer to the ESD desired data, in accordance with the available libraries, and run by ROOT to export this data to textual format. That is why the download of Aliroot, ROOT's version for ALICE events analysis, is required.

The text files containing all the physics data are then read by the Python scripts responsible for generating the animation, completing the procedure.

The whole process is a lot more user-friendly than it may seem at first glance; except for installing a couple of programs - ROOT and Blender -, the only thing left for the user to do is run a line of code from the terminal, which executes a script that automatizes everything from running ROOT to rendering and saving every animation .mp4 file. The final result is a directory inside of which is a series of animation clips, each one corresponding to a different event in the chosen ESD file.

This project was developed in Ubuntu 18.04 version of Linux, therefore this is the recommended OS for running it.

First, create a directory to keep everything:

If you haven't yet, clone the project's repository:

Make sure the repository is inside the alice directory you created.

It is then time to download Blender, a free and open source software that is used for animating events. Stick to version 2.79b, or there is no guarantee the code will work.

The next step is to install Aliroot, which is CERN's official software for ALICE physics analysis, so you are able to process the relevant information for the events.

In case you are not conCERNed about the data being used for the animation and only wish to generate a standard one, skip to the Default Animation section below.

Here is the sequence of steps for installing Aliroot:

At this point, you are ready to pick an ESD file at CERN's Open Data Portal. ESD files regarding the ALICE experiment can be found on http://opendata.cern.ch/search?page=1&size=20&experiment=ALICE. You can either manually download your ESD file and save it in the project's repository directory (in the same path as this README.md file), under the name AliESDs.root, or have your ESD be downloaded automatically, as explained further.

Once you're all set, all there is left to do is run the workflow_sketch.sh script through your terminal. Don't forget to access the project's repository directory first:

The script offers several options in order to personalize the output. For example, in order to set the number of frames per second (fps) to 24 and the video time duration to 8 seconds, one should run the command like this:

As you can see, options are either preceded by double dashes (as in --fps 24) or by a single dash (as in -t 8). The option's value should follow the option's name, also separated by a space. Some options, such as the --download option, don't expect arguments. When any available option is not called, it runs the code with its standard value. See below for a detailed list of all the available options, which can also be checked out by entering:

In case you have chosen the automatic ESD download option, run the code as:

where <URL> is the URL address for the chosen ESD file. Of course, you can add other options as well, if you wish.

Here's an example of the procedure, using an ESD from the list identified as Pb-Pb data sample at the collision energy of 2.76 TeV per nucleon pair from run number 139465, at CERN's Open Data Portal:

Needless to say, if you run the code again after you've already downloaded the ESD the first time, there is no longer need to type in the --download and --url options.

After running the script, it may take a long time to generate all the animations, but as soon as it is done, they will be available inside a new directory uniquely identified according to the chosen ESD file. Each clip is also identified by event number. Enjoy!

For generating a default animation, simply run the script workflow_sketch.sh in your terminal as below, from inside the project's repository directory:

After this, a single default animation should be ready. It will be available inside the blender directory, in .mp4 format. Enjoy! You may want to check the table above for information on the using options.

Here are some running examples to illustrate how to run the code and make some animations.

An event's multiplicity is the number of particles in it. In the following example, the code only animates events with multiplicity within the specified range, which is a minimum of 20 particles and a maximum of 300:

One event, one camera

One of the simplest ways to run the code is to just animate one event, using only one of the available cameras. The bash -m option is just an alternative way to use the --maxparticles option, showed above. Hence, the following example will generate a single clip, from the Forward Camera perspective, with no more than 100 particles:

One of the coolest options available is the mosaic option. For every selected event, it generates animations in four different cameras - one of them with shifting perspective - and combines them into a single 2x2 clip containing all four of them.

Here's a peak of what the result is like:

One of the features of this code is that it computes the average value of z momentum for each event, given by the sum of every particle's Pz value divided by the total number of particles. Evidently, a lot of the negative values cancel out the positive ones, only to leave us with a resulting value that may be either negative or positive. Once this is done, we take the absolute value of this result as a way to express, in a sense, "how much" the particles tend to go one way rather than the other - regardless of which way.

(You may think this sum is always going to be zero because of conservation of momentum, but it turns out because of some instability in the center of mass of the initial colliding packages, it is usually not. Plus, there may be particles, such as muons, that aren't being taken into account because their data is stored separately.)

When running the code, you may choose to only animate events that have this quantity - the absolute value of the average of the z direction momentum values (phew!) - greater than a certain number, measured in GeV/c. This way, you may select events that have "boosts" of particles to the same side, as in the following image. 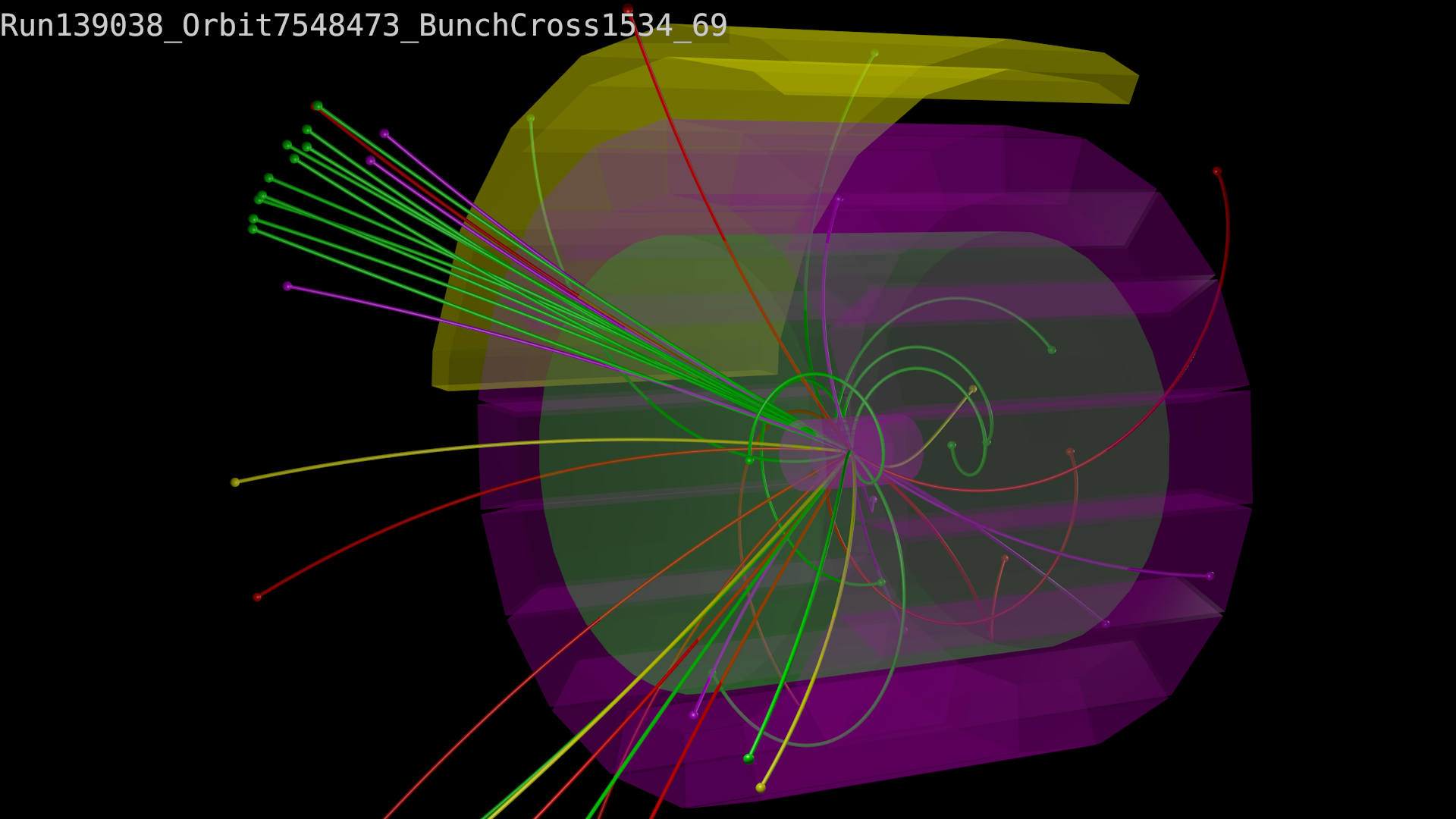 This is done by using the --minavgpz option, like so:

But how do we figure out a reasonable value to run the code with, given our chosen ESD? As the first step of the animation making, the Aliroot software performs an analysis on the ESD file, in order to extract the relevant information. As a bonus, it also generates frequency histograms of some physical quantities, such as the one at hand. To be able to access these histograms in the first place, though, you must have run the analysis at least once. You can run the analysis on your ESD file without making any unwanted animations by simply choosing to animate zero events:

Then you must run Aliroot so you can browse .root files through what is called a TBrowser:

A window should open, where you can access the histograms in the path indicated:

There you have it: a histogram that shows how many events are within each interval of our desired quantity, in GeV/c. That way, you can have an idea how its distribution behaves inside a given ESD, thus know what values should "do the trick".